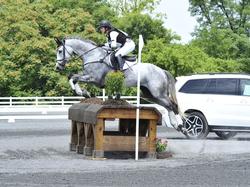 Competed through Preliminary/CCI2*-S
“Beverly’s Bebop” has multiple top placings at preliminary and FEI 2*.  A preliminary packer at eventing, this stunner is ready to move up to intermediate.  He has also competed to 1.15m at WEF.  He is fancy enough to do straight dressage as the complete all-arounder.  Perfect for the ambitious adult amateur or junior rider.  Range: Over $75,000.  Video: https://youtu.be/x0_7h8ixtz4  Currently available for sale or lease. 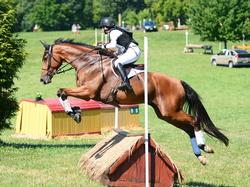 Competed through Intermediate, Scope to Go Way Beyond

“Beverly’s Clueso” is a consistently clean show jumper and very straight forward cross-country horse, almost always finishing on his dressage score.  He has the scope to jump a big fence with a gallop to get him around a big track.   Range: Over $75,000.  Video: https://youtu.be/XnK_1vyoa5o

By the Holsteiner sire grand prix jumper stallion line of Contender and out of the Irish draught mare from the famous King of Diamond line, this fancy gelding was started by 4* English rider Polly Jackson.  A very fancy mover, this gelding has top placings from novice through preliminary.  Being very straightforward, he goes in a snaffle in all three phases.  A mid-level eventing packer, this bay is fancy enough for straight dressage.  Competed through CCI1*.  Perfect for the adult amateur or junior looking for eventing miles or the competitive all arounder. 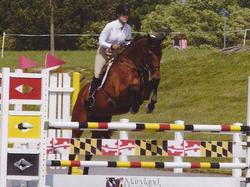 This elegant gelding has hunted 3+ seasons with Orange County Hunt.  Being a lovely mover and jumper, he started this year as an eventer, going from novice to preliminary level in less than one year.  Gambler has also competed in level III jumper shows, as well as schooling hunter shows.  Originally purchased as a “husband horse,” Gambler has become the consummate and competitive all-arounder.

For video of Gambler at Rocking Horse Trials in February 2013, go here.

After years competing as a preliminary eventer, Dresden Hit has made the move to hunters.  Dresden pinned in both under saddle and over fences classes in her first hunter show at HITS Ocala in February 2015.  Hunter trainer Pam Baker describes Dresden as a sweet mare with a “lot of heart”.  Dresden Hit is out of the impressive bloodlines of Davingport and Sandro Hit and is very fancy, sweet and easy to ride.  Perfect for a child or adult.

For video of Dresden hunters under saddle, click here.

For video of Dresden hunters over fences, click here.

For video of Dresden with a 10-year old beginner rider, click here.

Just arrived: Pahokee.  Pahokee has played up to 8-goal.  He's small but fast.  A real sweetie on the ground, he always shows up for work.

Bred out of top warmblood lines, "Monte" is an elegant dark horse with three lovely gaits and lots of presence under saddle.  In addition to having true potential as a dressage horse, Monte has demonstrated an incredible aptitude for jumping.  Extremely brave and quiet, Monte hacks out on his own and has already started jumping ditches, half coffins, drops, banks and logs in and out of water.  Monte is a pleasure in the barn and would suit the amateur looking for the all-around sport horse. $18,000.

For video of Monte on the flat, youtu.be/EhYboCCwnmU. 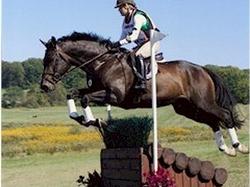 This sweet gelding is safe, scopey and a very fancy mover.  Beautiful, quiet, and talented – a quick review of his record will show that he has been sound enough to compete year round for years.  He has eventing through intermediate (fences up to 3’11’) and shown in both dressage and jumper shows.  He has also fox-hunted.  A real gem for the beginner who needs the all-arounder school master who will be consistent, quiet and safe. $45,000 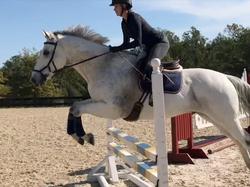 Tazzmania is a beautiful grey with three great gaits and auto lead changes.  He was champion in his first outing as a hunter this summer.  He is an experienced event horse, haven competed through preliminary.  He would be a great first horse for someone looking for some safe miles on cross country or in the show ring.  Very easy keeper.  Range: Under $30,000.  Video: https://youtu.be/XIFVmi8JWLE

This cute mare has speed and handiness.  Playing currently at the 4-goal level, she has also schooled over fences.  Always comes out ready to go, but sweet enough for a beginner.